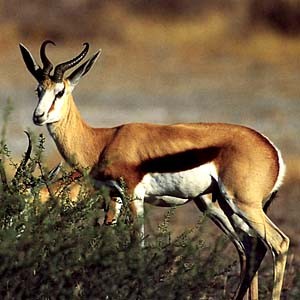 The springbok is a medium-sized antelope. Their natural habitat is formed by the dry inlands of South Africa, of which it is also the national symbol. The animal gets its name from the high jumps that it makes. In part to shake off pursuing predators and to warn the rest of the herd. But the animal also tends to jump straight up on four legs, a behavior to show themselves off to the opposite sex. The springbok has a light reddish brown coat with white belly which is trimmed with a dark line. On their backs they have a kind of white `crest` .

We have singles skins, as well as cushions, poufs and springbok patchwork rugs. They are all available in different colours upon request.